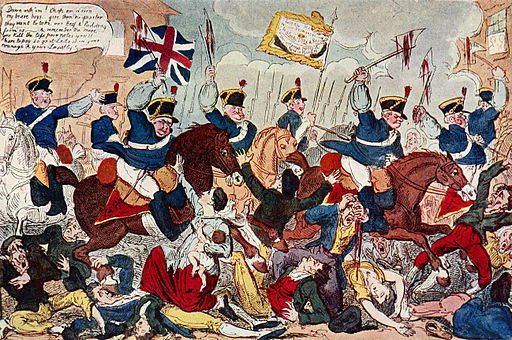 Mike Leigh’s Peterloo is a barnstorming masterclass in social history that successfully conveys, with the director’s trademark gritty realism, the experiences of early 19th Century northern urbanites as they battled for their democratic rights in the face of Tory oppression.

The focal point of the film, the Peterloo massacre, unfolded on 16 August 1819 at St Peter’s Field in Manchester, just 15 minutes from Leigh’s childhood home. A crowd of at least 60,000 working people from towns across the north had gathered under the baking sun to listen to a speech on parliamentary reform by Henry Hunt, (Rory Kinnear) an arrogant but well intentioned “gentleman farmer” and political reformer.

Hunt never finished his speech. As he addressed the crowd, the twitchy local magistrates, watching the “swinish multitudes” from the edge of the field (from a house in the film) with growing horror, ordered the mounted militia to clear the area. Armed with swords and drunk on alcohol and hate, the militia, made up of middle class locals, launched a murderous attack that left 18 people dead and over 650 injured.

This is the event the film builds towards from the beginning and, for the most part, it bears the weight of expectation well. Courtesy of Amazon studios Leigh had a large budget for this film and the extra money helped fund an impressive re-enaction of the day’s events.

The helplessness and fear of the protesters and the rage and brutality of the magistrates and their henchmen drip from the screen in a spectacular and tragic scene that weaves seamlessly between the militia, magistrates and crowd. It is not, however, without its weaknesses. The grand finale lacks authentic gore and fails to convey the scale of the crowd, fundamentally weakening its impact.

True to the collectivist values of its director, the film has no star, instead telling the story from the viewpoint of a wide array of contemporary characters from both sides of the class divide. The cast is enormous and Leigh has stuck to his principles of promoting European cinema by assembling an all-British troupe of actors, each one of whom puts in a stellar performance.

Using the battle of Waterloo as his historical anchor, Leigh opens the film with a traumatised young Mancunian soldier wandering aimlessly round a battle-field on the last day of the Napoleonic wars. The soldier, Joseph, (David Moorst) then makes his way back to his home-town where he re-joins his impoverished family and struggles to find employment. Salaries are falling sharply and the Corn Laws have made bread unaffordable. Frustrated and half starved, Joseph and his father, Joshua, (Pierce Quigely) a weaver, attend political rallies where orators articulate the case for fighting for the vote and parliamentary representation.

Sticking with the theme of Waterloo, the movie turns next to higher ranking veterans of that battle. First, the victorious Duke of Wellington is granted a gift of £750,000 by parliament and then decorated war hero General Sir John Byng (Alastair Mackenzie) is hired by the Home Secretary, Lord Sidmouth, (Karl Johnson) to watch over Manchester, the “most seditious” place in the country.

The movie then switches between northern workers on the one hand and magistrates, politicians and royals on the other, taking us on a procession of monologues, discussions, speeches and comments delivered by both sides. “Scum,” says one factory owner when he sees his workers have taken the day off to attend the rally, adding: “I put food on their table and this is how they repay me.”

The talks are entertaining and effectively portray the depth of hatred between the elite and the workers but there are just too many of them, causing the film to lose its momentum and labour its key points.

Yet Peterloo remains a powerful piece of storytelling. Scenes like those at court, where one toothless man is sentenced to hang for stealing a jacket, paint a vivid picture of the wretchedness of ordinary people’s lives. It is with empathy and a building sense of dread then that we wait for the workers to attend the rally, knowing they will face a brutal response.

Leigh has somehow succeeded in making the events and characters and in Peterloo feel as real as if they belonged to a modern day anti-capitalism protest.

Leigh’s intention with this film was to deliver a history lesson he complains is missing from the nation’s classrooms. Peterloo has certainly achieved that goal in emphatic style, though it is not clear if the lesson is positive or negative. Some argue that the backlash from Peterloo cowed the government into refraining from using lethal force to crush dissent while others say it changed little. Either way, the film will churn the stomachs of anyone today who has experienced police oppression at peaceful protests.